Home > Be a Big > Match Stories

These real life stories are just a few examples of how Big Brothers Big Sisters of Danville Area is making a BIG difference for children across the region.

Eleven years ago, Shayla, six years old, and her mom walked into the Big Brothers Big Sisters of Danville Area office to sign the little up for a Big. Over the last eleven years we have seen the little grow year after year. From the time that the youth was matched, the little attended training activities about how matches functioned and safety issues. Shayla got to do the fun stuff as well. The little went bowling, on hayrides, swimming, yoga classes, cooking classes, and etiquette training with dinner at the Golden Leaf Bistro. Shayla got to dress up for the dinner outings. The youth’s favorite past time is reading. This year the youth has been matched for four years. She has maintained the A/B Honor Roll for her entire high school career. She is graduating 10th in her class of 187 students. The little had the opportunity to go to several colleges and universities: VA Tech, University of Virginia, Howard University, Spellman College, Morehouse College, and Danville Community College. The youth got to explore career opportunities at The Washington Post and the Farm Bureau.

The little has always had her sights set on VCU in Richmond, Virginia. She has been accepted at three Virginian universities with VCU being one of them. The little, big, and the parent visited the university in the fall to check things out. From the visit and the acceptance letter, the little is on her way to “Big” things.

The volunteer was excited about being matched with a little in the Danville-Pittsylvania County Area whose life she could make an impact on. The little, T’kai, who had been matched before, wanted to be with a Big who was fun and interested in being outdoors. The youth has an interest in sports, especially soccer.

In October 2017, Annie and T’kai met and the match was off and literally “running.” Annie’s interests and vocation is in healthy lifestyles and eating. T’kai has been involved in playing soccer since she was in Middle School. The majority of their outings include some kind of fitness activity, i.e. walking on the trails or running in rural neighborhoods. The volunteer attends the some of the little’s soccer practices and matches. The little says that the highlight of their outings was when the volunteer took her to a professional soccer game in Greensboro. The little and Big often eat together. Some of the “healthy meals” the two eat at restaurants, but they often cook the dinner together. This match functions in the way that it was designed to in that they meet for a minimum of one her each week. Annie and T’kai have a wonderful relationship because there is nothing that the two cannot discuss with each other; they are good friends. When T’kai and Annie met almost three years ago, the youth had no interest beyond graduating from high school. She would probably stay in Danville, and find a job in manufacturing. The little shared with her Big that she was interested in Cosmetology. Again, they were off and running. The volunteer found out that there was a Cosmetology program at the local community college. She encouraged the little to sign-up for dual enrollment that allows the youth to take college classes while still in high school.

When the youth graduates this Spring, she will enroll in a Business curriculum. When she graduates from the community college her dream will be realized, she can own the business and do hair. However, now the little does not want to stop there; she has her eye on a four year institution of higher learning.

Several years ago, Caleb’s mom called the agency seeking a Big brother for her son. The mother let the Match Support Specialist know that the youth did not have any male role models in his life. The child’s father died when he was six years old, and he did not have grandparents or uncles to support his development. The youth was being homeschooled and made passing grades. The youth had a genuine fear of people, and never really left home. The parent just wanted a male role model who would “take care of my son.”

In walks Curtis, who had a little that relocated and caused the match relationship to end. In his former match relationship, the Big was an outstanding mentor who interacted well with his former little, and records show that he made a huge impact on his self-esteem and behavior. Curtis and Caleb started their match relationship in February of 2016. Shortly after the start of the match, the mother had to be hospitalized. The match stayed intact and the caretaker encouraged the match to continue because the parent had that kind of confidence in the match and Curtis. The volunteer and youth started to go out to their favorite restaurant, “Chick-fila.” While there, they would talk about what was happening in school, his grades, and what he had done since the last time that they were together. Gradually, the little came around and became more talkative. The volunteer is a coach in youth sports at the local high school. The little has the opportunity to go to games with his Big; this became the highlight of the outings. On the last outing that the two had they were visiting a farm where the little had the responsibility of some outside chores (which he had never had before). This visit ended up with a huge barbecue. The little says that he would like to do that again.

Now for the successes that were influenced by the Big, the little has grown up and has better self-confidence/self-esteem. The little even has friends outside the match. The little has entered the county high school and has improved grades. Caleb is graduating from high school this year with his attention focused on a four-year institution. 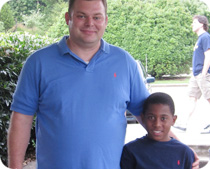 One day a member of the Big Brothers Big Sisters board came to the office, and said to send the owner of O’kelly’s a volunteer application. She informed us of how eager he was to become a Big. Gerald had a personal interview and all of his references reported the same thing. They implied that he would be an asset to a child and any other organization that is a part of. Gerald was matched with a wide eyed and busy 9 year old named Ziquan. The “little” knew that this was the best thing that could have happened to him. They visit and talk almost every day. Gerald has taught what it is to be responsible.

The youth is learning to work hard for what he wants. Ziquan has been able to travel, visit the family, and play fun games. The most exciting part of all of this is the “little’ gets a weekly haircut, picks out his own suits, sings in the choir, and attends church with his “Big”. This month brings a lot of joy to both Gerald and Ziquan. Thanks to the J. T. Minnie Foundation for help with this match.”

The answer to this puzzle was revealed. The original Big for the Little at Woodberry, graduated from Averett that December, and the Averett Coach did not want the Little to be without a Big, so he assigned “M”. “M” said he had time on his hands and a place in his heart for Big Brothers Big Sisters. This was his fourth year as a Big for our school based program. Not only is he a dedicated athlete, he is a dedicated Big.

As I started to prepare for “Match Day”, I heard nervousness and butterflies from everyone but the new Little, “A”. Her mother wanted to meet the Big, “J”, to make sure she was worthy to spend time with her child. She wanted to be sure that everything would be just right for her daughter. We assured her that we had completed the necessary documents to insure a successful match. She was still nervous about the meeting.

On the way to “A’s” house, “J” talked about how much she cared for her new Little and could hardly wait to be able to do activities with her outside school and home. However, she too was nervous. She wanted “A’s” mom to like her and for everything to go smoothly. She kept saying, “I know I am doing the right thing”.

When we arrived, everyone had an opportunity to visit under the big oak tree out back. Both women had their time to share and ask questions, and “A”, the Little, just smiled as the exchange took place. The breeze blew and the nervousness was swept away, and replaced with hugs and smiles. Another wonderful Match Day for Big Brothers Big Sisters.

View the transformations and statistics that result from our program.

We Help Kids Stay in School

A child with a mentor is 52% less likely to skip school than a child without a mentor.

Help transform the life of a child in our community by being a positive and caring role model.

Our experienced approach to mentoring has resulted in thousands of lasting relationships and helped transform the lives of children across our region.